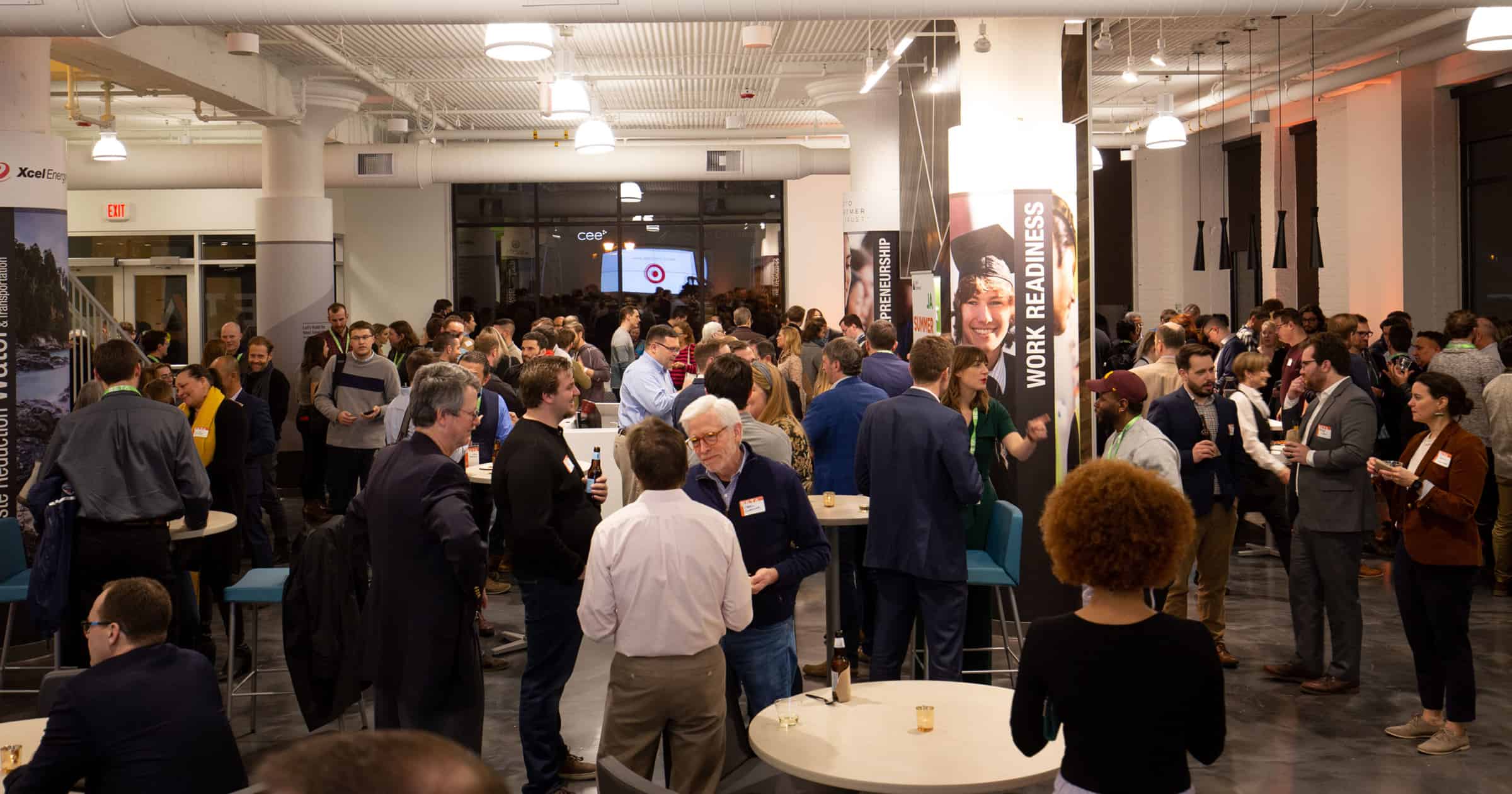 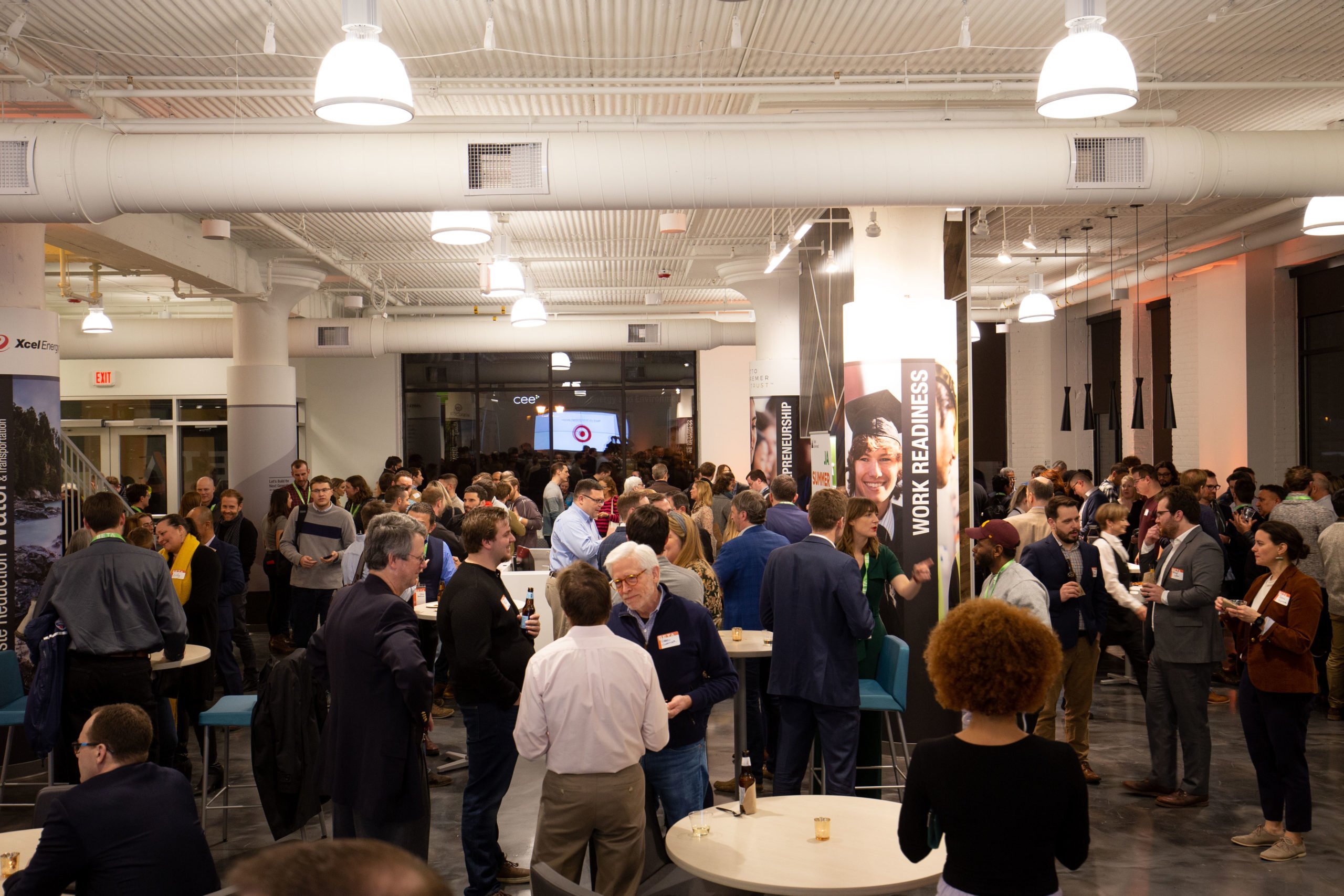 The Minnesota startup sphere might be still finding its voice, but BETA’s State of the State event showed that it’s well on its way to becoming a roar.

“We were thrilled to feature updates and trends from local business leaders to a packed house,” Casey Shultz, executive director of BETA, said. “There’s exciting momentum in the startup community here in Minnesota that’s only getting started.”

Throughout the evening, founders and community and regional leaders discussed where the Minnesota world of innovation is today, and where it’s going. Here’s our breakdown of each panel and speaker. Read through these highlights and try not to get excited about Minnesota’s startup scene. We dare you. 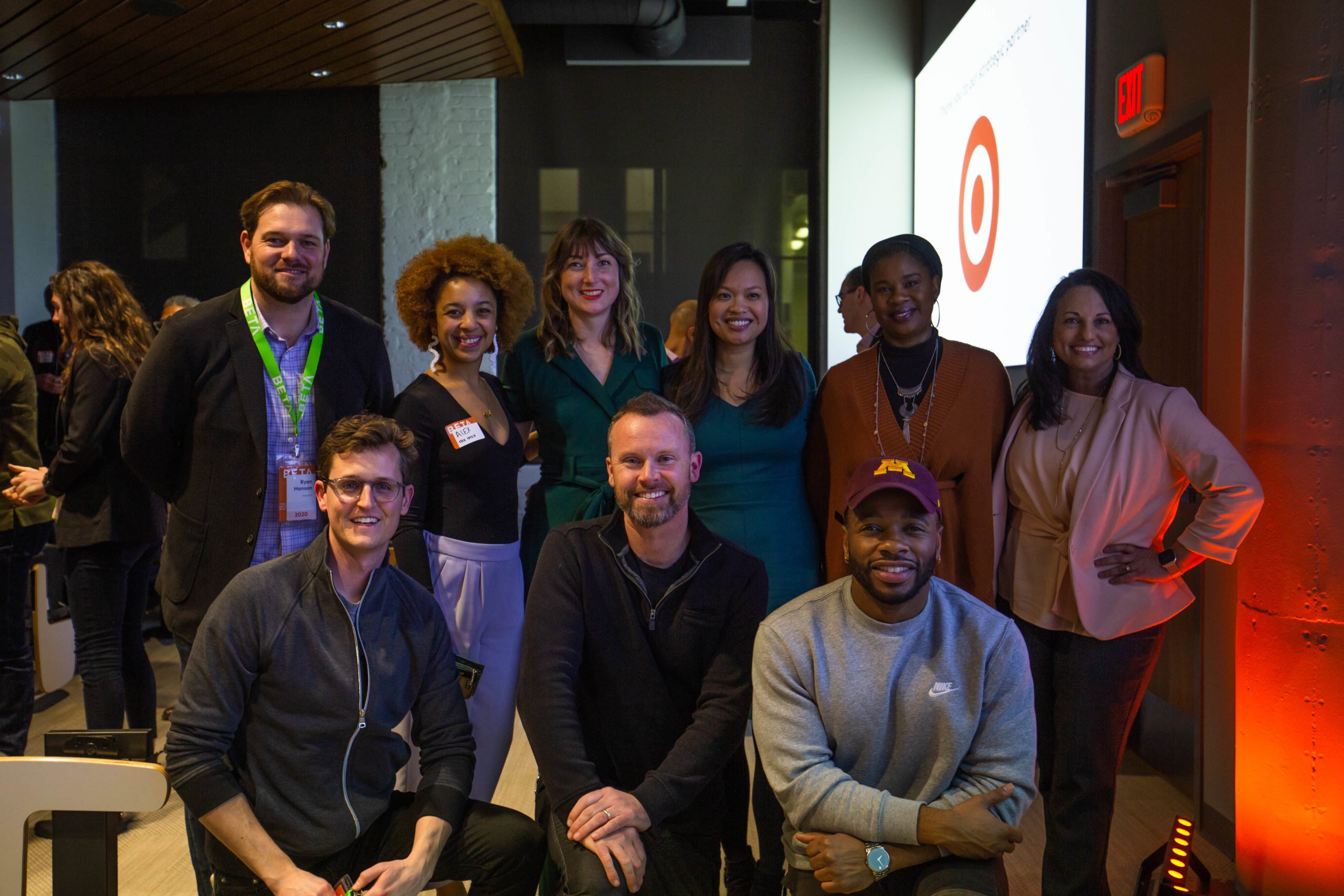 At Civic Eagle, a startup focused on using technology to promote better democratic outcomes for people and their communities, there’s been lots of growth going on. Damola Ogundipe talked about how the company has attracted investment outside of Minnesota and has been basically doubling the size of the company every six months.

“We’re happy to be part of the movement and change that’s happening here as we continue to improve the Minnesota tech ecosystem,” Ogundipe said.

When asked how to maintain a physically and mentally healthy environment for employees at Civic Eagle, he explained that the company is remote-first and requires that each employee take at least 14 personal days off per year — with three of them being consecutive.

“There’s no cap or limit,” he said. “You take it off when you need it. You work at your pace.”

Based in Albert Lea, Mortarr was founded to overcome efficiencies in the commercial design environment online. Abby Murray spoke on what it’s like to start a company outside of the Twin Cities and some of the struggles in creating what Mortarr is today: a B2B marketing platform for the commercial design industry that works with more than 800 companies and 20,000 active users per month.

“You can do great things anywhere,” Murray said of being based in rural Minnesota.

Murray noted that the company has access to everything a Twin Cities-based startup has, and though they were wary in early stages — not putting the physical mailing address of Mortarr on any platform until recently — the company has gained confidence and investors don’t bat an eye.

For the past few years, Dispatch has been busy, Ryan Hanson, said. Best described as a delivery marketplace for wholesale distribution firms to get products out to the job site, Hanson said the company performed more than 300,000 deliveries last year — and the plan is to double that this year. Dispatch also has a newly remodeled space and has shifted in how the business is functioning.

“[We’re] very fortunate to be here in Minnesota,” he said. “There’s a great community and we have access to every resource that we could want.”

When asked how Dispatch has evaluated all fundraising options, he mentioned that figuring out the minimum amount you need and managing every dime is a way to raise money in itself.

“We’ve had some really great people tell us, ‘You don’t have to raise as much as you think,’” he said.

Social Impact Strategies Group has three main buckets of work, Elaine Rasmussen, said: consulting and facilitation specifically around racial equity, diversity inclusion, and training implementation; investor education to help investors align their money with their values; and ConnectUP! — an annual conference bringing all of these points together. Rasmussen spoke on some things that need to improve in the Minnesota entrepreneurial realm, such as investors being more straightforward.

“We have a humble attitude here and that’s not helpful for entrepreneurs,” she said.

Rasmussen also mentioned that the community needs to spend more time on early-growth businesses because those are the ones who usually stick around. Lastly, she said there’s a need for flexible and patient capital. To address this, Social Impact Strategies Group is launching an integrated capital fund to directly connect local, underrepresented entrepreneurs with local investors who are at least interested in having these conversations.

Speaking also on issues in the Minnesota startup community, Reed Robinson, urged organizations to work with one another and consider how they all align to assist on the entrepreneurial experience and journey. He also called for founders to consider big questions such as, “What do you want to accomplish? How big do you want to get?” Once founders know what kind of support system they need, it’s easier to assess how you’ll get there, he said.

“As a community, we need to ask ourselves questions like, ‘How are we setting expectations for the people that we want to invite in?’” Robinson said.

Robinson also mentioned the need for organizations to consider if they’re creating pipelines that can service entrepreneurs of all types.

“Let’s build these pipelines together,” he said. 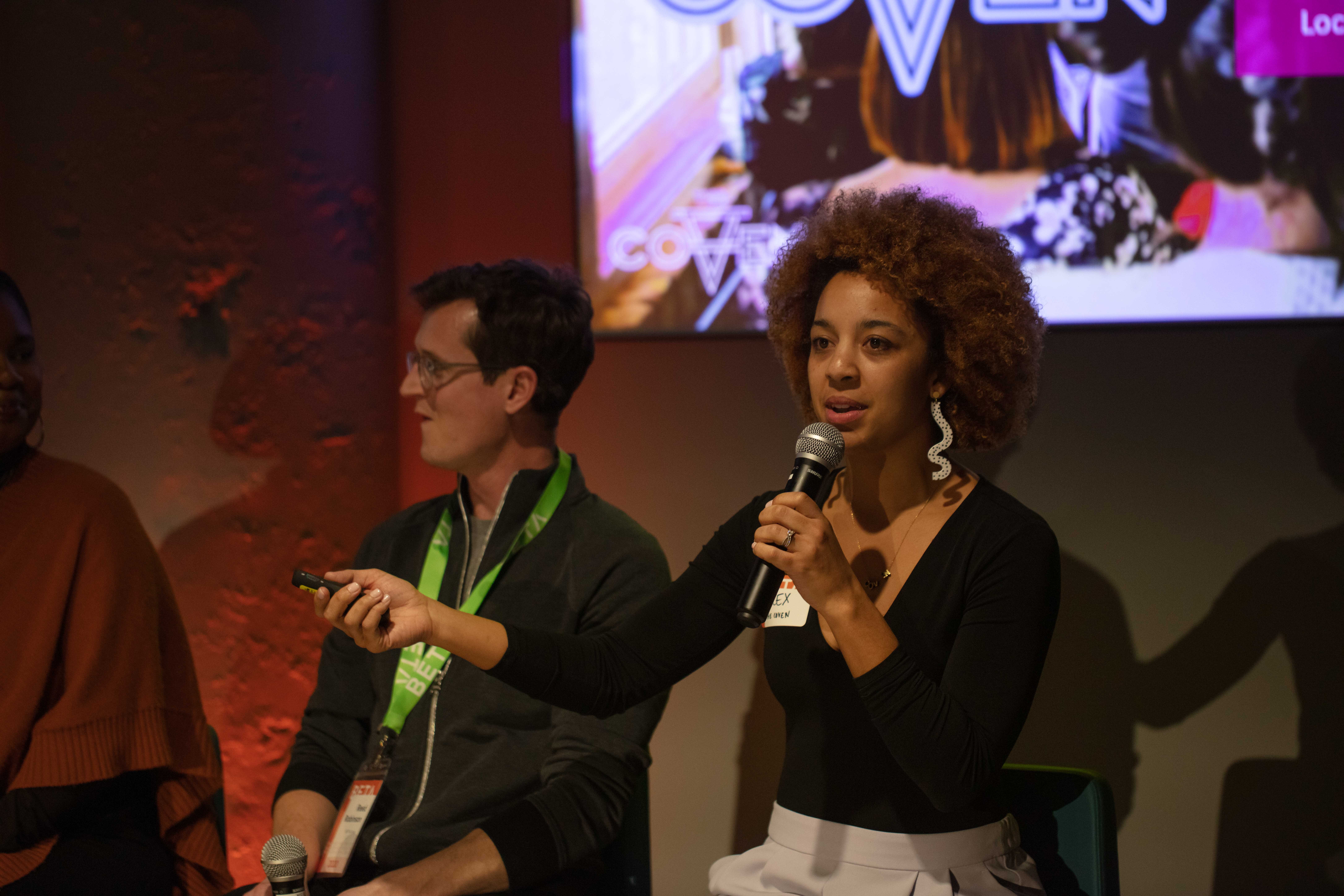 Alex West Steinman of The Coven speaks during the Community Panel. 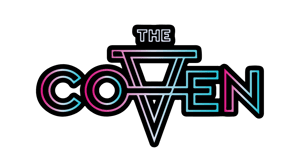 One of four co-founders from an advertising background, Alex West Steinman spoke about The Coven: a co-working space for women, binary and trans folks. With around 500 active members, The Coven prioritizes being socioeconomically diverse and gives away one free membership for every five purchased. It is also one of the only co-working spaces in the country to have childcare. When asked what the difference is between her business and WeWork, Steinman was quick.

“We’re profitable,” she said, not missing a beat.

Speaking to challenges such as losing parking lots and the initial cost of physical space, Steinman also said they came back in Q4 of last year tripling revenue.

“[We’re] refocusing ourselves on getting the space open and growing as quickly as we can,” she said.

With a background at Google, Mary Grove got her entrepreneurial spirit from her parents who immigrated from Thailand. In addition to working for Revolution, Grove and her husband also run a nonprofit focused on inspiring Minnesotan youth in underrepresented communities to get involved in tech called Silicon North Stars. Since 2017, there has been a positive net migration to Minnesota, Grove said, which is part of why Revolution has six Minnesotan companies in its portfolio.

“Startups are the backbone of economic development,” she said.

When asked what she looks for in companies as an early stage investor, Grove mentioned five core things: market, product, team, differentiation and ecosystem.

Running a remote-first company holding company that acquires strapped software companies, Kevin McArdle is a newcomer to Minnesota. After living here for about six months, he mentioned noticing, “a lot going on here, but no one is talking about it.” His call to action for the startup community is to bring people to events, get more involved, write a check, and tell a story. Speaking to how startups can participate in a global economy, McArdle suggested that all companies should have a remote work plan, if they don’t already.

“One of the benefits of being a remote-first company is that it forces you to think on a global scale,” he said.

Whether it be tax credits, grants, or programming, Launch Minnesota’s main goal is to accelerate the growth of startups and amplify Minnesota as a national leader in innovation. Neela Mollgaard, who recently became executive director in the last six months, says startups are fortunate to be in Minnesota right now, with a state government that allocates dollars and a directive to help accelerate startups. Launch Minnesota has so far funded 20 innovative startups and allocated $10 million in angel tax credit and just announced the Launch Minnesota Network — created to improve coordination and capacity across the state’s innovation ecosystem. When Mollgaard asks startups what they need from the state, healthcare stands out the most as an issue, she said. 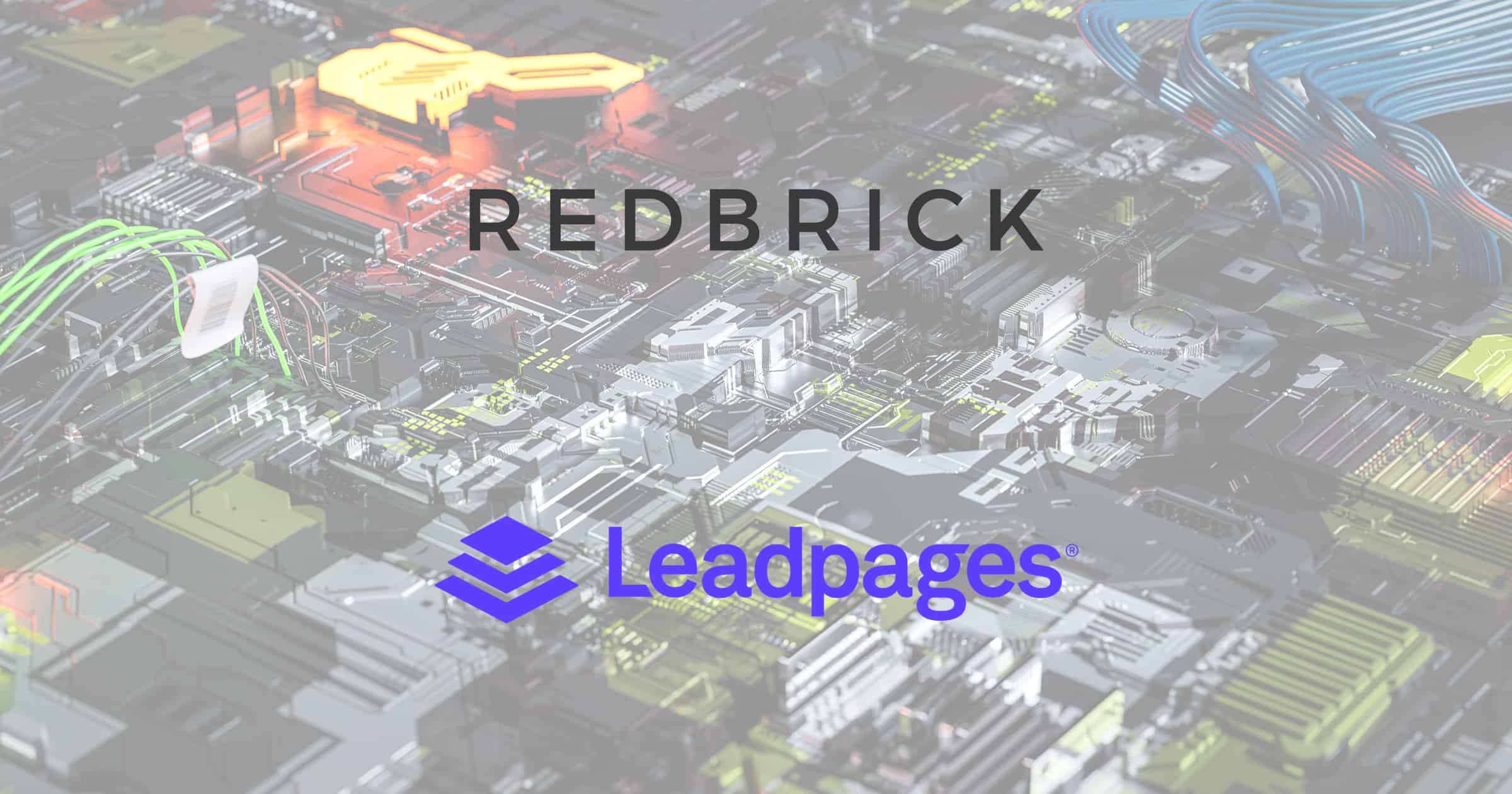 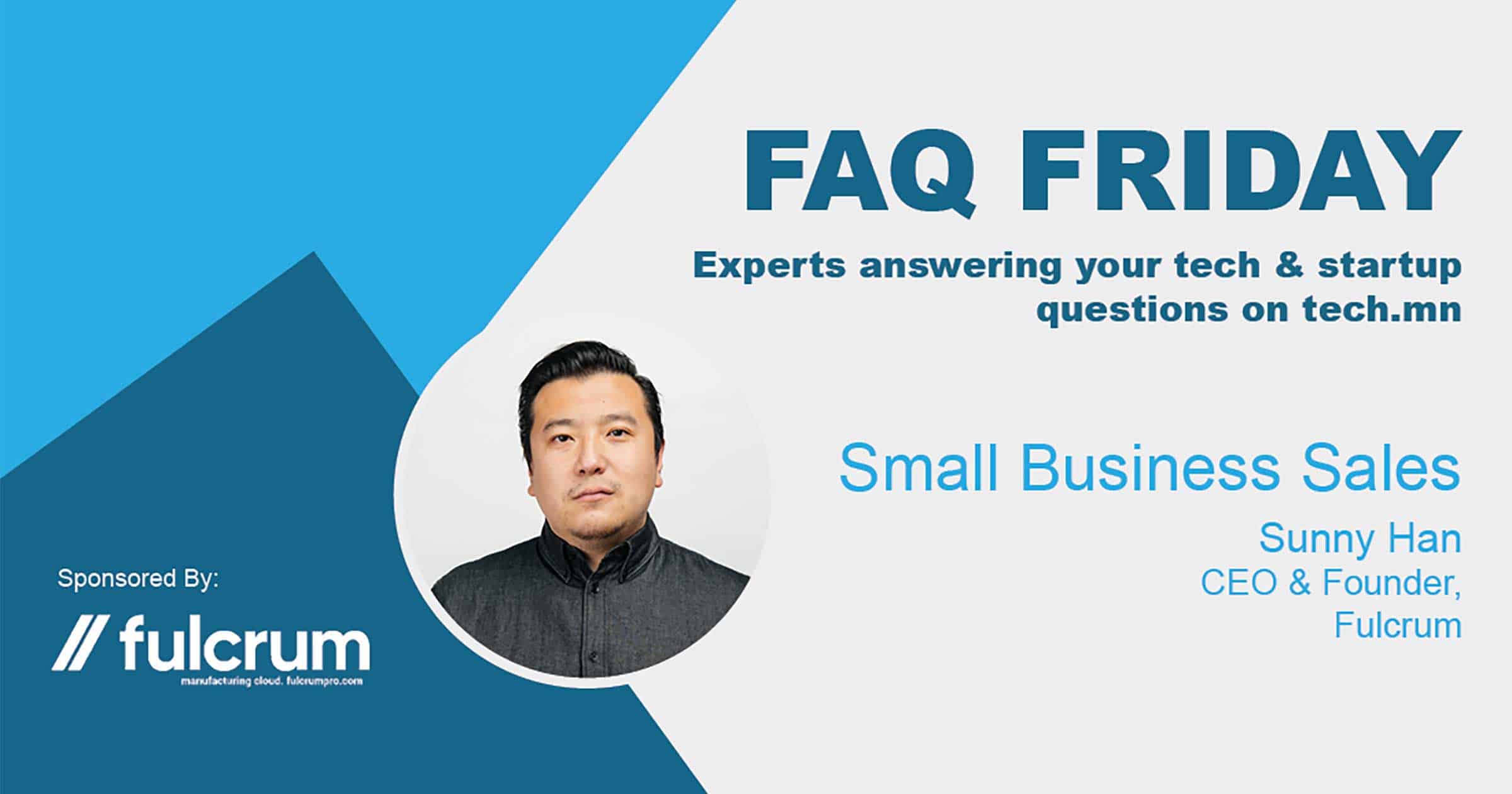 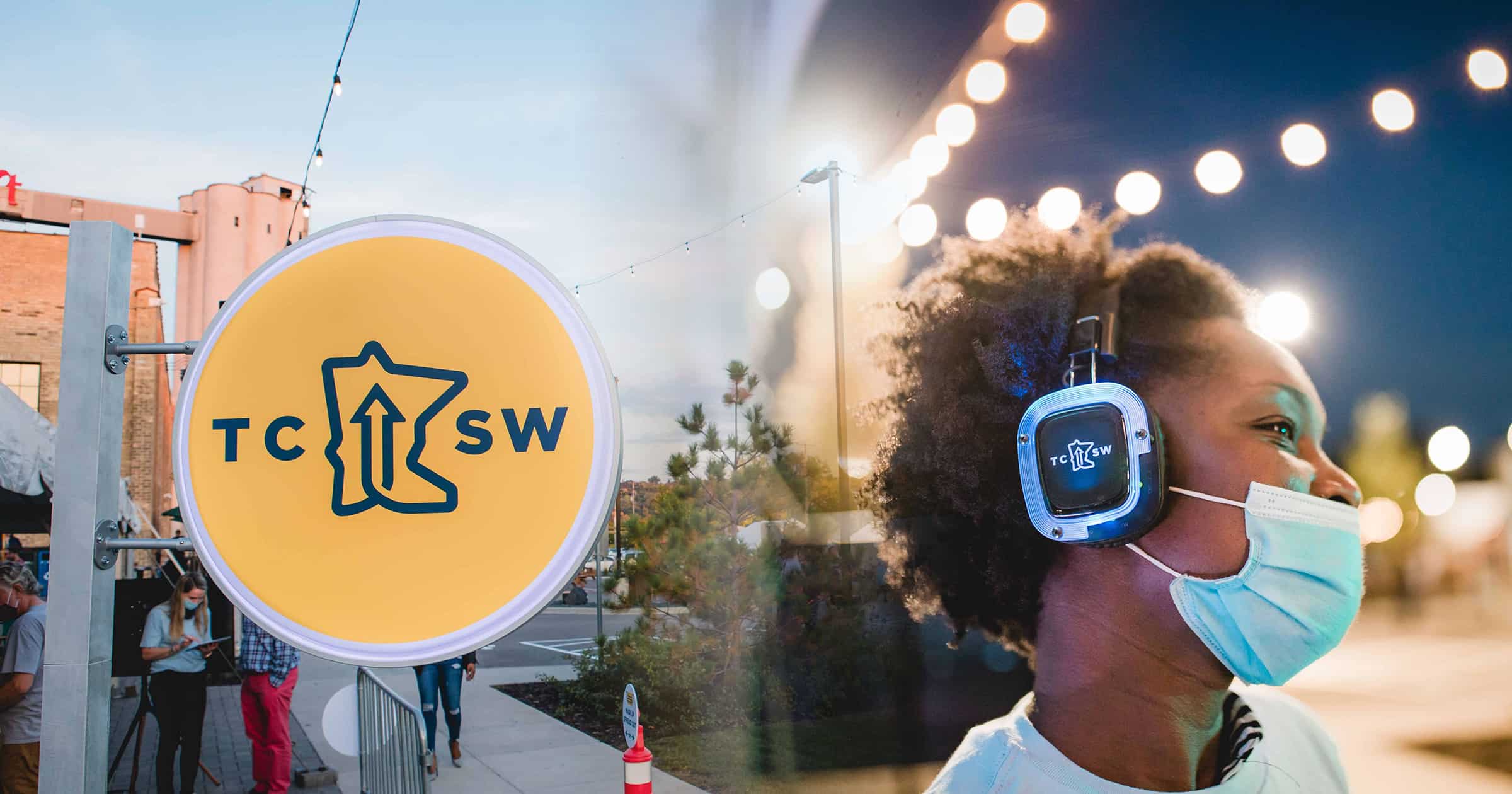 A Look Back at Twin Cities Startup Week 2020 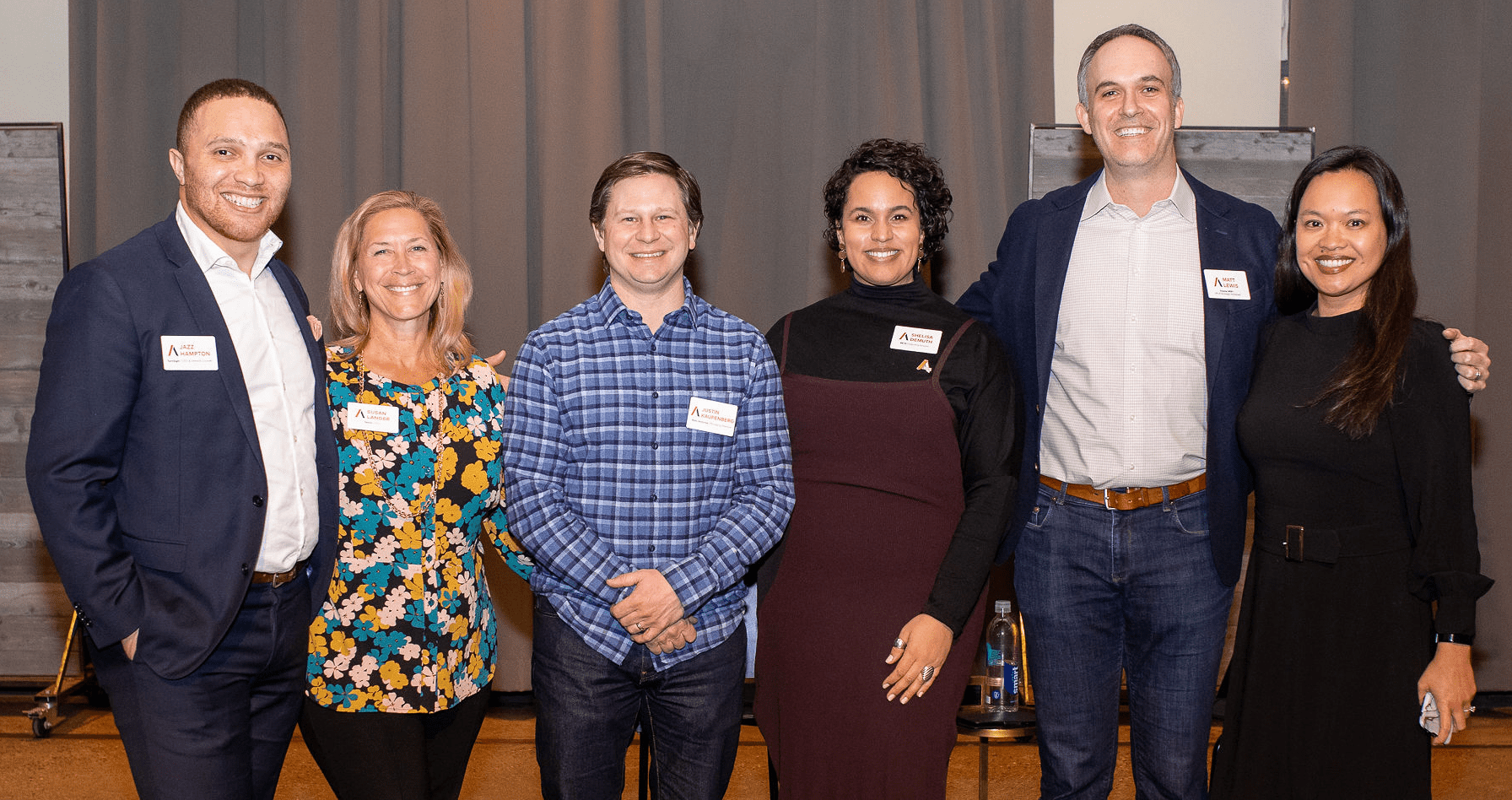 The tech.mn Podcast: BETA State of the State 2022 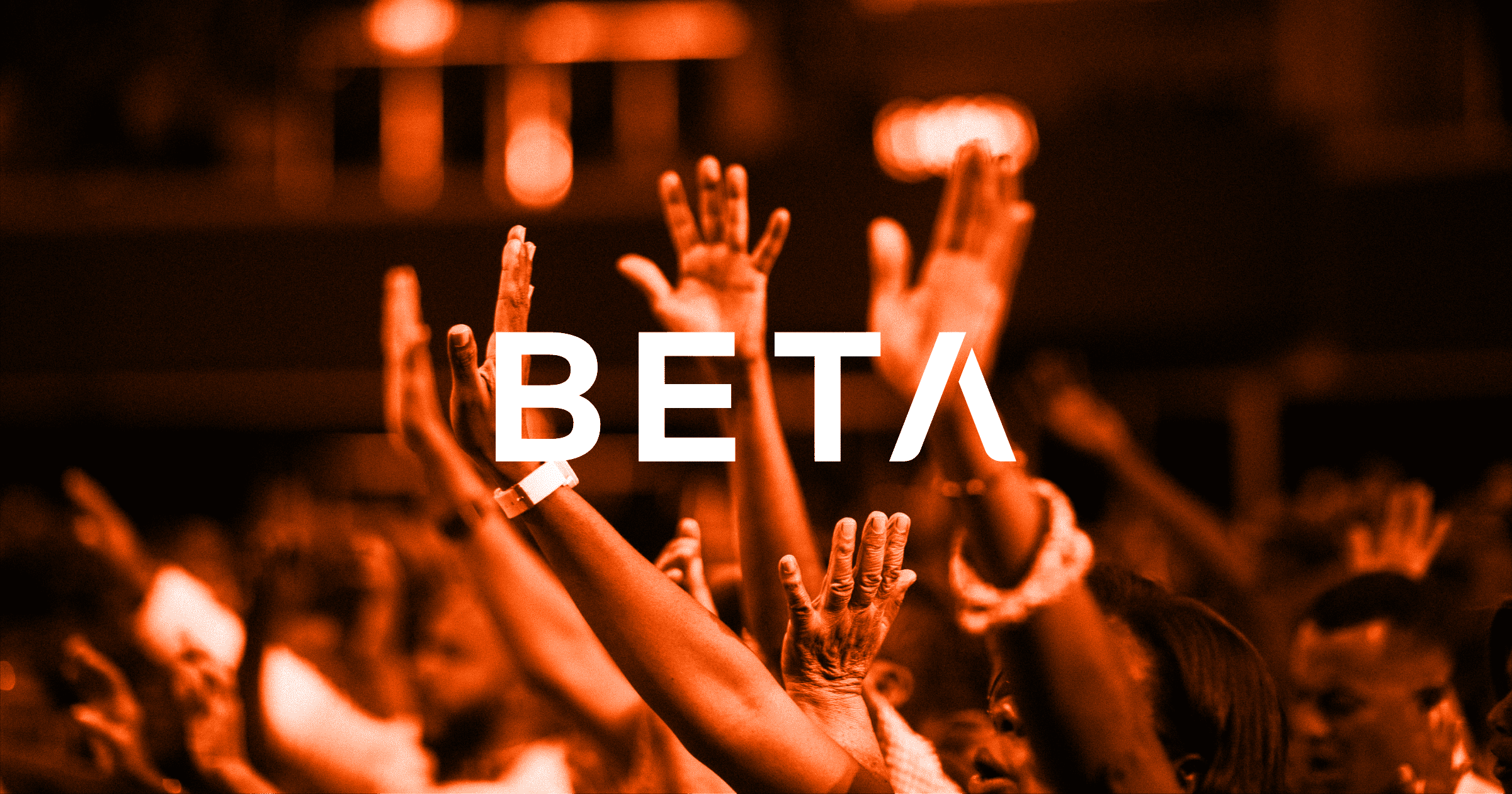 BETA Announces State of the State 2023